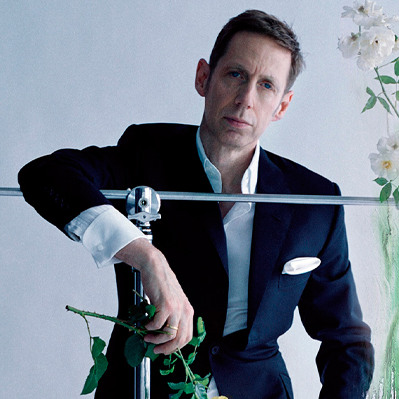 Nicholas David Gordon Knight is a British fashion photographer and founder and director of SHOWstudio.com. He is an honorary professor at University of the Arts London and was awarded an honorary Ph.D. by the same university. He has produced books of his work including retrospectives Nicknight (1994) and Nick Knight (2009). In 2016, Knight's 1992 campaign photograph for fashion brand Jil Sander was sold by Phillips auction house at the record-breaking price of HKD 2,360,000.

Knight was born in Hammersmith, London. He studied photography at Bournemouth and Poole College of Art and Design and published his first book of photographs 'Skinhead' in 1982 when he was still a student at the school. He was then commissioned by i-D editor Terry Jones to create a series of portraits for magazine's fifth-anniversary issue. His work caught the attention of art director Marc Ascoli, who commissioned Knight to shoot the 1986 catalog of Japanese designer Yohji Yamamoto in collaboration with Peter Saville.

In 1992 Knight took a year long break from fashion photography to work on an exhibition at Natural History Museum, London with the British architect David Chipperfield. The exhibition was called Plant Power and was on the theme of the relationship between humans and plants. The exhibition lasted for fifteen years.

He directed his first music video in 2001, for the song "Pagan Poetry" by Björk. In 2003, he created a film for Massive Attack's album 100th Window. In 2011 and 2013, he directed the videos for Lady Gaga's single "Born This Way" and Kanye West's "Bound 2" and "Black Skinhead." In 2016, he photographed American rapper/singer Travis Scott for his sophomore album Birds in the Trap Sing McKnight.

In 2016, he was commissioned to shoot official portraits of Queen Elizabeth and Prince Charles for the Queen's 90th birthday.

Also in 2016, Knight's hand-coated pigment photographic work, Tatjana Patitz for Jil Sander, 1992 sold for an artist-record $304,204 at Phillips Hong Kong. The work, originally photographed in 1992 and reprinted in 2016, featured supermodel Tatjana Patitz in a Jil Sander advertising campaign photographed by Knight. The celebrated photograph from Knight's commercial career in the fashion industry represents the collectability of his painterly works to buyers in the world of fine art.

In 2019, he collaborated with Kanye West again, directing his short film Jesus Is King. Filmed in the summer of 2019, the film brings West's Sunday Service to life in the Roden Crater, artist James Turrell's installation in the Painted Desert. The film accompanied the release of Jesus Is King, West's ninth studio album, and was released in IMAX theaters on October 25, 2019.

In 2021, he reunites with Gaga for a collaboration with the French brand of champagne Dom Perignon on the campaign "The Queendom" helped with long time collaborator Nicola Formichetti, in order to realize a series of photos as well as a fashion film, released on April 6, with soundtrack from the album of the latter popstar Chromatica.